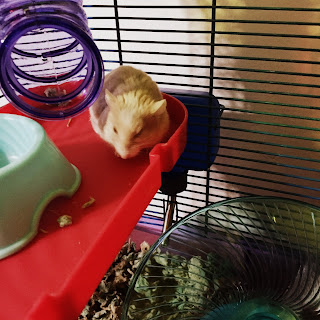 I thought for sure last weekend was going to end with a dead hamster in my freezer.

Joey was gone last weekend working on his car. (Don't even get me started on this damn car project!) So it was just me and the girls. We slept in on Saturday with plans to head into Palm Springs for the day and meet friends for dinner. And then I heard...

"Mom! Persimmon is not moving!"

I thought for sure she was gone. I walked in and expected to find the hamster dead. She wasn't, but she was not in good shape. Just so you know how bad it was, normal Persimmon will not let anyone get near her. If you tried to pet her or god-forbid pick her up she would bite you. Guaranteed. I opened the top of the little box she was in and she did not react. She was laying flat on her stomach and I could see she was breathing. I reached down to touch her and she did not react.

Immediately Phi started sobbing. Full on panic crying. This of course brought Louie into the room who became hysterical when she heard. Now is a good time to remember that I was solo parenting. Then I started crying because my kids were so upset and I had no idea what to do.

I starting messaging my sister Elaine, she works at a great vet clinic and I knew she would know someone who could give some advice. But when it came down to it once a small rodent shows signs of illness it is almost always too late.

I cleaned out the box she was in and put her back and handed it to Phi. I told her to try to see if she could get her to drink some water while I scrubbed the cage clean. The next few hours were spent with Phi like this.... 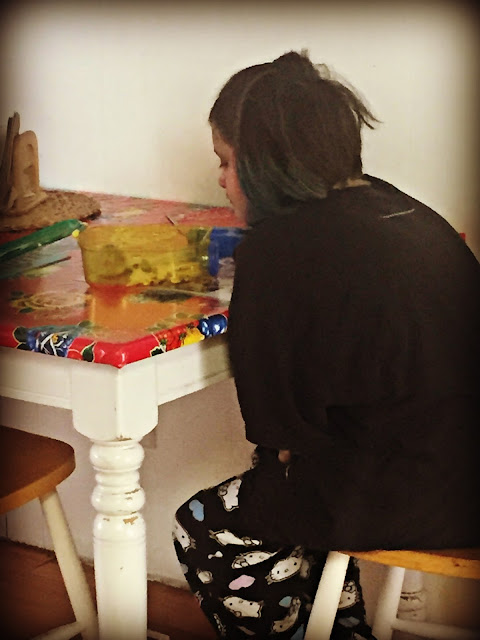 while I waited to her. "She stopped breathing".

Really guys I thought it was a matter of time.

Eventually Persimmon started to move a little but when she would get up she would be shaking and wobbly. As the day went on she started to move around more. As the afternoon started to get away from us I had to get Phi to get ready for dinner out. She went to take a shower and left the hamster with me and Louie. As we sat and stared we noticed that she was shaking less and moving around more. She was even pulling herself up. Then she opened her eyes. You would have thought she hit the Super Mega Lotto the way Louie reacted.

We put Persimmon back in her cage and headed out for dinner. As we drove home a few hours later I prayed that I would not come back to stiff hamster. Instead she was climbing through tubes and even eating a little.

By the next morning Persimmon was back to normal. Back to eating, drinking, pooping and trying to bite us. It was a freakin miracle. Even Elaine could not believe it. 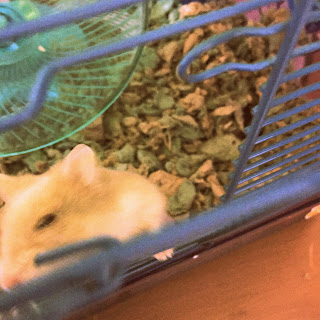 Now I am super paranoid and am constantly waking up this poor hamster even time I see her sleeping. I need to make sure she is okay and not back to super sick state.