The Force is Strong in My Family 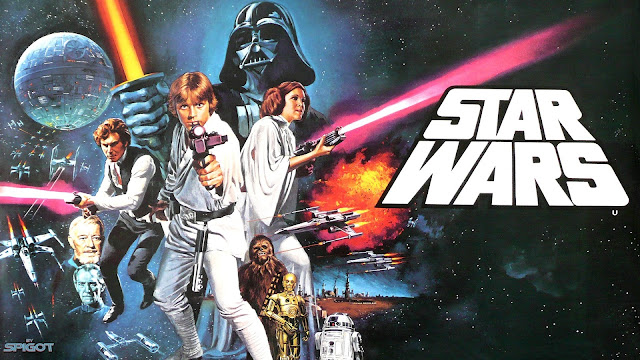 Okay so yes I am a child of the 80's, but I grew up with sisters and no real interest in science fiction stuff. The movie ET really messed me up. Also the Neverending Story was so weird. So what I am trying to say is that I had never seen the original Star Wars movies. I haven't seen the newer ones either but from what I hear I am not missing out there.

When Uncle Matty found out that I had not seen the movies he declared 2015 the Summer of Star Wars and vowed to get our families together to watch Episode 4, 5 and 6. Last night we watched Return of the Jedi and much like Harry Potter I get the fandom now.

Okay in case you too have made it this far in life without watching this trilogy be warned that the following has spoilers!

Star Wars Episode 4: A New Hope: If I had to rank these flicks this one would be my least favorite of the 3. Coming in with just general "I don't live under a rock" info about the plot it was a bit confusing to follow. The crazy names of places didn't help out. The 70's hairstyles were on point. The trio of Luke, Han, and Leia reminded me of Uncle Matty, Joey and Myself back in our pre-kid days. Joey was obviously Han because like Han Joey is a smartass who always drove. Of course C3PO and R2D2 were my favorite characters. And Chewy. What's not to love about a big cuddly wookie. Now the special effects are straight out of the 70's so a little cheesy, but in a really cool retro kinda way. Plus the plot was so hard to follow crazy special effects would have made it harder to concentrate. And is it just me or did Luke take the deaths of the aunt and uncle who raised him a little too well? I mean finding out you're a Jedi is cool and all but they did raise you Luke. 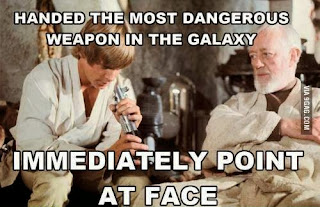 Star Wars Episode 5: The Empire Strikes Back: So I had some time to digest the first movie and ask a million questions so I went into this film with a clear understanding what was going on. Of course the star of this one for us was Yoda. As soon as he opened his mouth I was like "Ummmm that's Grover from Sesame Street!". Turns out the guy who did Grover's voice also does Yoda. Frank Oz rules. So thanks to a vision of Obi-Wan  Luke is out training to be a Jedi with Master Yoda. While he is doing handstands with Yoda on his feet Leia and Han are left to fight Vader and the Empire, and to fall in love. Ohhhhh. 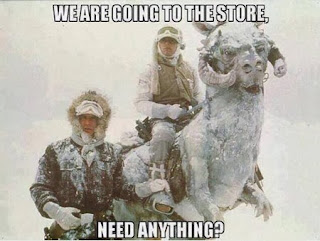 This is the one where we meet Lando Calrissian. How gorgeous is Cloud City? We also get to meet the charming Jabba the Hut and Boba Fett. We also get a glimpse of the connection between Luke and Leia. This is my second favorite of the movies. And who knew that in the same battle Luke gets his hand sliced off and finds out that Vader is is Poppa? Talk about giving him Daddy issues! 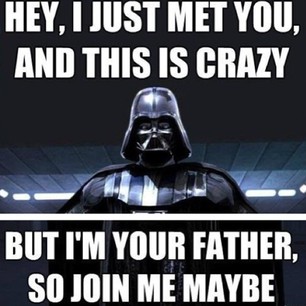 Star Wars Episode 6: Return of the Jedi: Despite the amount of characters that meet there demise in this one, it has to be my favorite. Mostly because of baby Ewoks.

First off I was not mentally prepared for Yoda to die. I thought he was immortal. Wasn't he like 800 years old? That was some sad stuff. 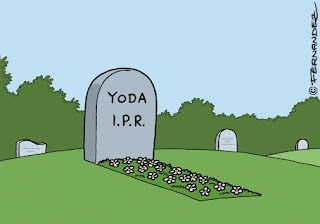 The whole incident with Jabba was way cool. When Han is finally removed from the carbonite I would have bet cash money that it was Luke but when the helmet came off and it was Leia I was like of course it's Leia. She's his lobster! I loved the forest like setting of Endor. Mostly because it reminded me of Bass Lake. This movie had some great suspenseful time and twists that left me with my jaw on the floor. Seriously I did not see that ending coming. Vader shocked the hell out of me. Shocked...get it....get it.....? We are left with a happy ending. How very Disney!

We ended the night by watching the trailer for Episode 7. We are all stoked. (Not as much as Uncle Matty, he is a Star Wars geek from way back) As much as I didn't think it was possible Uncle Matty has converted me and the girls into Star Wars fans. It really is a great story about good over evil, a father's love for his children, finding friends that stick by you no matter what, and even a little love story line thrown in there.

Anyone know where I can get a plush baby Ewok?

Next up on the Summer of Star Wars is Space Balls of course!