Oreos Will Never Be the Same- Magic Mike XXL 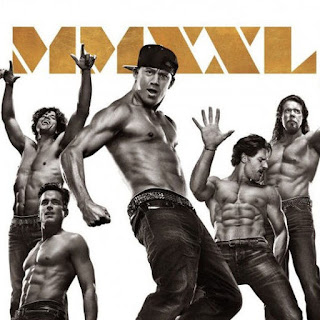 Now let me start off by saying that I have a healthy admiration for male entertainers. With that being said Magic Mike XXL was everything I wanted it to be and more. It was sweet, funny, and had enough amazing stripper moves from hot bodied men to keep a smile on my face the entire movie. I wasn't alone. Karla kept leaning over and whispering "I can't stop smiling".  It was that good.


"Is there really an annual stripper convention?"

Again let me clarify that it is a healthy obsession admiration for male strippers male entertainers.

But the "dance" scenes were mind blowing. When those first notes of "Pony" started the party really was on and popping and didn't stop until the credits rolled. I was also very happy to hear some Jodeci on the soundtrack. Jada Pinkett Smith was so freakin fierce that I have labeled her my new spirit animal. I found myself, like legit, giggling like a school girl. And that grand finale! I literally was covering my mouth with my hand in complete shock and awe. Karla and I were something like this for the last 20 minutes...

But like in a totally good way. I have a suspicion we will be seeing again soon.
at July 09, 2015