Language Arts: Phi had to write a 5 paragraph essay about her opinion on "The Island of the Blue Dolphins". I was very excited for this assignment, she was not as excited. To make it a bit easier we broke down the assignment over 4 days. We spend the first day making an outline for each paragraph. Then we wrote the rough draft over 2 days. Then on day 4 she typed it up and drew her own cover. 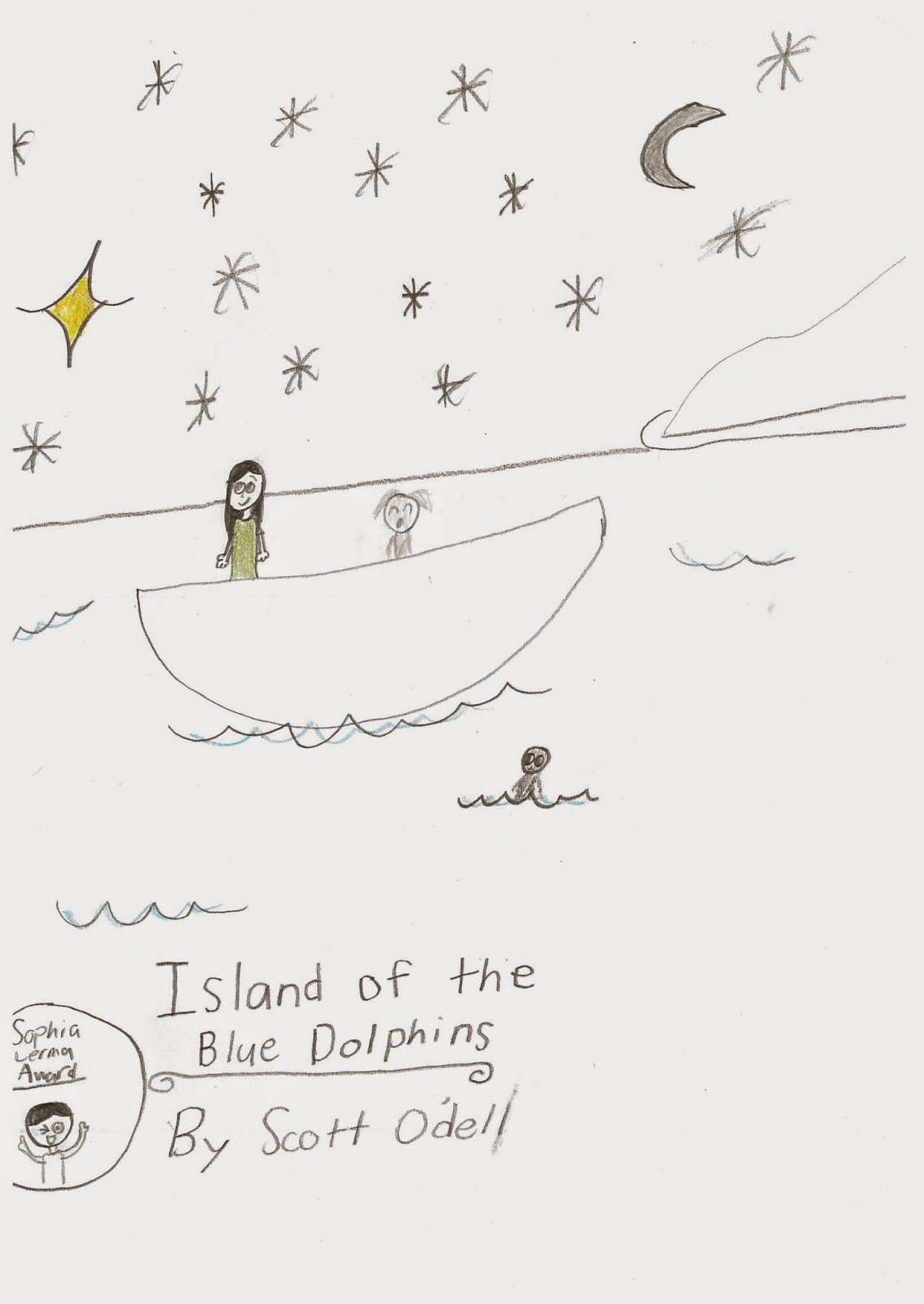 In this story Karana has many adventures.  During one adventure Karana and her dog Rontu went to look for a devil fish to eat and found a cave with skeletons inside. On page 124 O’Dell writes about the cave, “There must have been two dozen of them standing against the black wall. They were as tall as I, with ling arms and legs and short bodies made of reeds and clothed in gull feathers. Each one had eyes fashioned of round or oblong disks of abalone shells, but the rest of their faces were blank.”.  Another adventure was finding a place to live. She traveled all over the island looking for a place that had to be protected from the wind and far from the wild dogs.
I loved the beautiful setting of the Channel Islands. Scott O’Dell did a really good job describing the setting of the story. On page 9 O’Dell writes, “Our island is two leagues long and one league wide, and if you were standing on one of the hills that rise in the middle of it, you would think that it looked like a fish. Like a dolphin laying on its side, with its tail pointing toward the sunrise, its nose pointing to the sunset, and its fins making reefs and the rocky ledges along the shore.”.  I loved the setting of the ocean and coral cove. I think the ocean is very beautiful! I also like the setting because when I drive to my Nana and Tata’s house I can see those islands.
I also like this book because Karana is a good role model for girls. She is strong, brave, smart, and kind. An example of her strength is when she carried whale bones to make herself a fence for her house. An example of her bravery is when she survived a tsunami without panicking. Karana was also very smart, she could build weapons, she could make her own clothes, and she knew what foods to eat. When Karana found a wounded sea otter she cared for it, brought it food every day and named it Won-a-nee, this is an example of her kindness.
I would recommend this book to everyone! Island of the Blue Dolphins is an exciting book filled with adventures. The story takes place on an island in the middle of the Pacific Ocean. Karana is an important character in this book. She is important because she makes you feel you can be strong and brave too.

Social Studies: Phi brought home the social studies book this week. Her class has dwindled to 2 students so I think there are now enough books for everyone. This week we started learning about the Spanish colonization of California. We talked about how the Spanish started to panic when the Russians set their sights on Alta California. As a way to be aggressive New Spain sent Portola and Juniper Serra to colonize Alta California. Of course Juniper Serra was a Catholic Priest and he began the mission. You see where this is leading right? MISSION PROJECT! Phi turned in her top 3 missions with Santa Barbara being #1. I hope we get it so we have an excuse to do the tour.

Science: The science textbook is not on-line and it is very very cool. We sign in and pick our book, chapter and section and there it is on the screen. And the coolest part is that it reads to you! It looks like the program has a lot of interactive parts to it but I don't think Phi's school has paid for those options. This new science book also scatters questions throughout the chapter instead of all at the end. This helps so much. This week we learned all about the 3 different types of rocks; igneous, sedimentary and metamorphic. Along with answer questions we had a little experiment how fossils are buried. We layered coffee, sugar, dirt, salt, tea and rocks and in between we added a paper clip, broken crayon, rubber band and plastic necklace. It was hard to see the items in the cup so Phi labeled them. 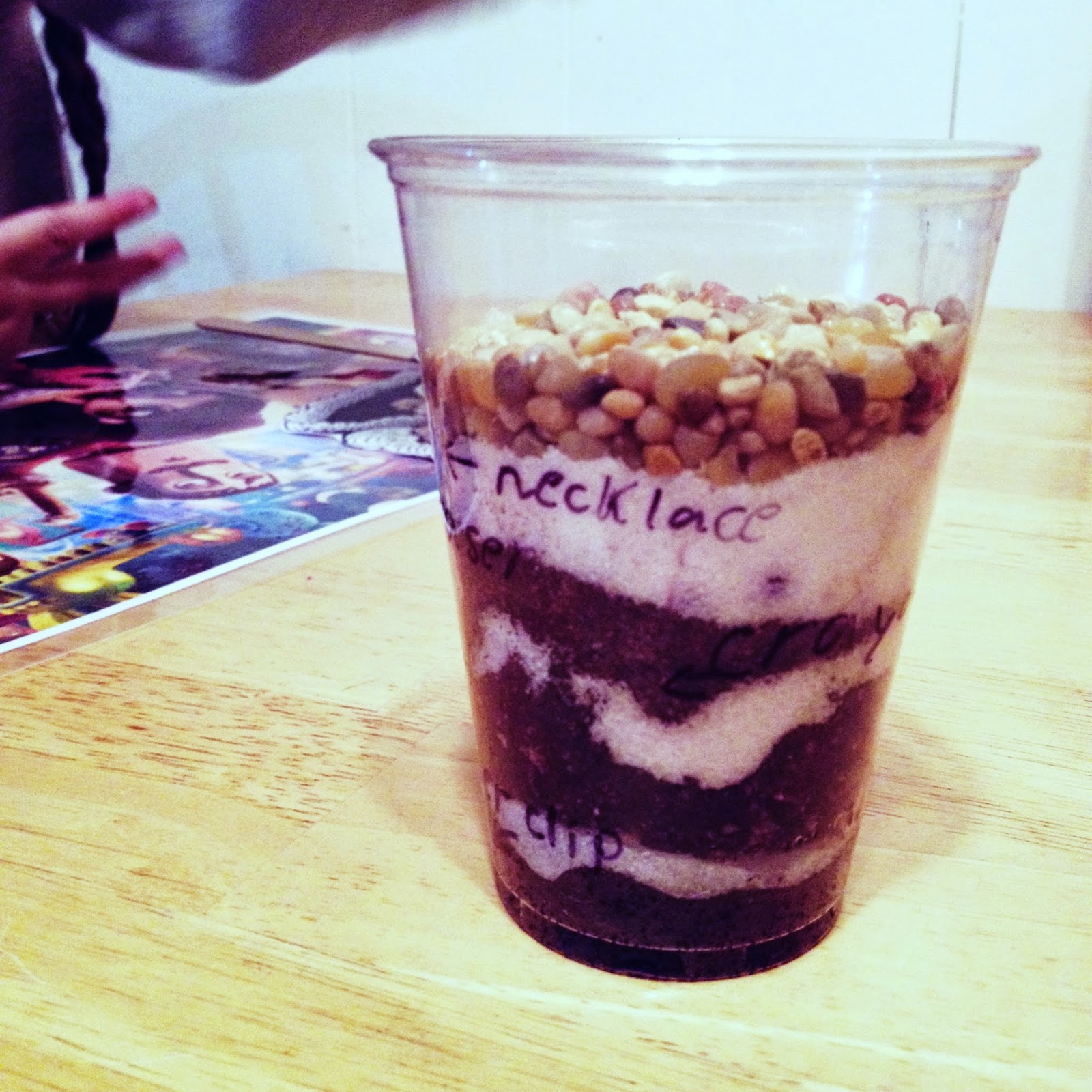