Since I have known Joey once and awhile he will mutter "I want to go to Vegas". The Phi has always had this slight obsession with hotels and casinos. With The Phi having a week long mid-winter break (wtf?) we decided it was time for the first ever family trip to Las Vegas. I had never been to Las Vegas with kids. The last time I was there I went club hopping with my friend Jackie. (Jackie and I now swap braiding techniques for our girls hair. Oh how times change). When I told my boss I was taking a few days off she laughed. "Taking the kids....to Vegas!"

I made the mistake of telling The Phi 3 weeks before the trip that we were going. I was forced to hear "VEGAS BABY!" no more than 100000 times a day. To make it worse, or even more adorable, there was Lou right behind her yelling "BABY!". The Phi and Joey were so stoked about this trip. Phi even checked out a travel book about Vegas and slept with it. They were beyond excited.

They day finally arrived and we were off! The drive there was not too bad. About 4 hours. We stopped in Baker, Ca to experience The Mad Greek. Then before we knew it we were checking into Circus Circus and the girls were jumping on beds. 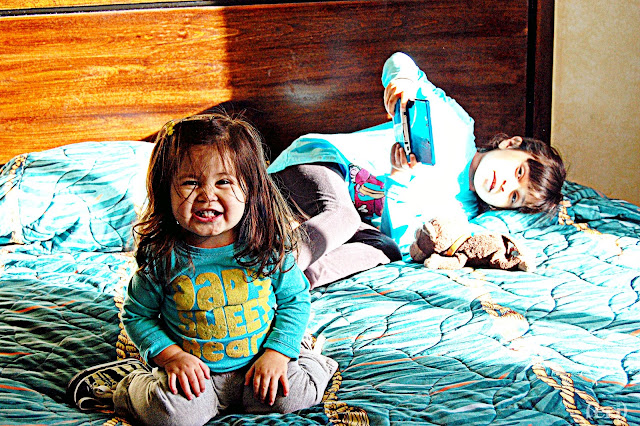 After settling in we headed out to Fremont Street. Vegas, old school style! I had never been there and it was a very cool place. A giant screen above you complete with zip-line. Little shops and of course casinos! 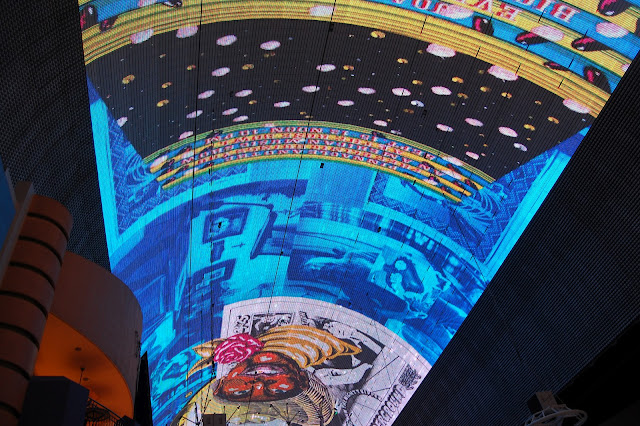 After wandering Fremont Street and people commenting on Joey's beard. (One dude even yelled "ZZ Top!") we decided to eat at the Fremont Casino buffet. While in line an older couple was ahead of us. After we paid for our meal we noticed money on the floor. The Phi picked it up and it was a $50.00 (ironically the same amount we had just paid to eat!). I told her it was the couple ahead of us. She walked up to the man tapped him and handed him the money. The women opened her wallet and confirmed she had dropped the $50.00. They were so grateful they gave The Phi $5.00. And that was the only money we won the whole time we were there. 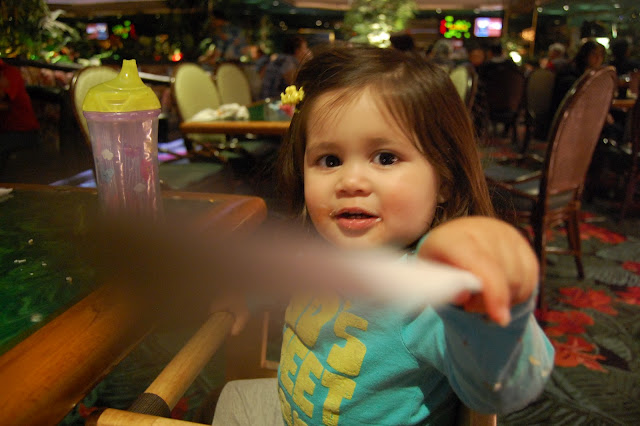 The next day started with yet another buffet. Lou and Phi loved them. Lou apparently was storing fruit loops in her cheeks for later. 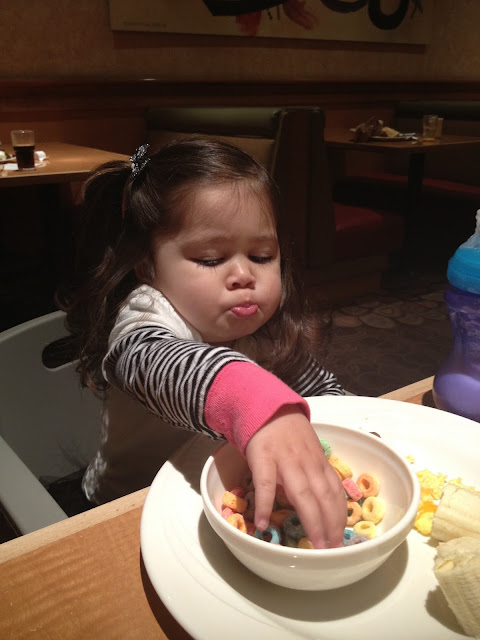 Then we spent the next 5 HOURS walking the strip. We drove to the MGM Grand and walked up to Caesers and back down. My children were complete troopers. No complaining and the both had a good time. The best part was watching The Phi just take it all in. She was in awe of everything. 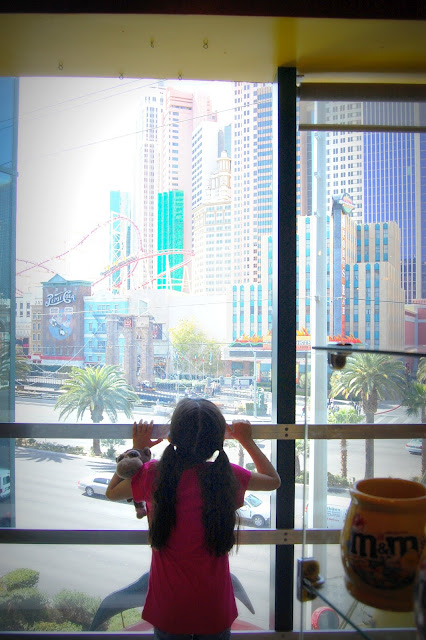 Outside of Caesars there was this temple. The Phi has a pretty tight connection with God and when she sees a chance to pray she always does. It's just her. 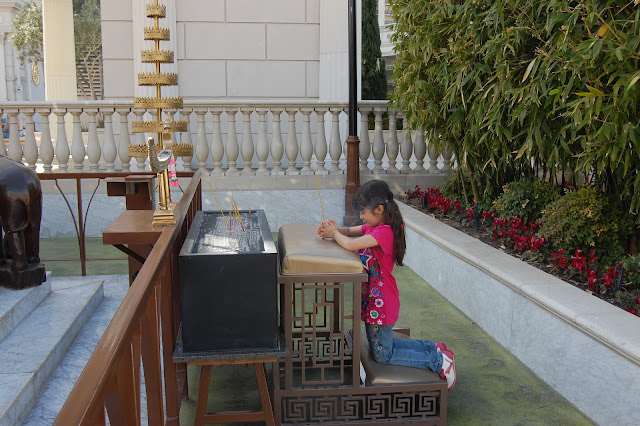 We cruised the Forum shops for a while. I took more pictures on this trip than I had in a long time. It was awesome. 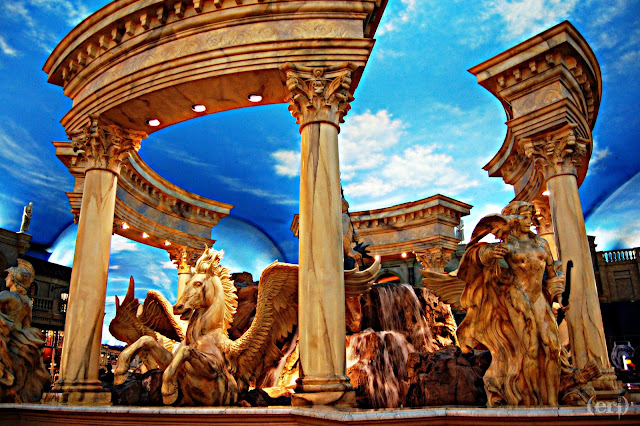 The Bellagio lobby is my favorite. It is stunning! This is the ceiling. 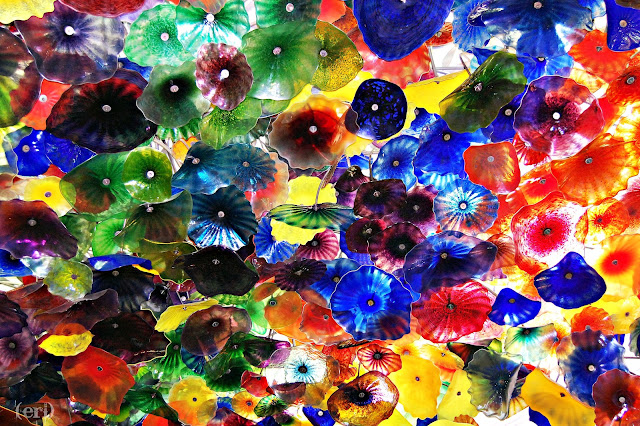 While walking through the lobby we had a celebrity sighting! I noticed a giant blond man in leather and I finally recognized him as Dogg the Bounty Hunter. And of course with him was Beth. I was stunned and grabbed Joey's arm and was like "OMG It's Dogg the Bounty Hunter!!" I had my camera around my neck but by the time I snapped a pic this was all I got. 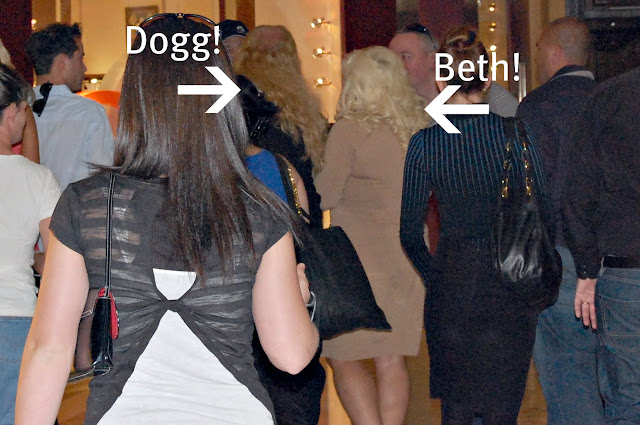 We headed back to the hotel and rested for a few. Then we headed back down to eat some pizza. On the way there The Phi and I were walking and Joey and Lou were behind us. (Lou walks SO SLOW!). A groups of girls stopped Joey and gushed over Lou. One of them just gave her this stuffed cow. Oh what it must be like to be Lou! 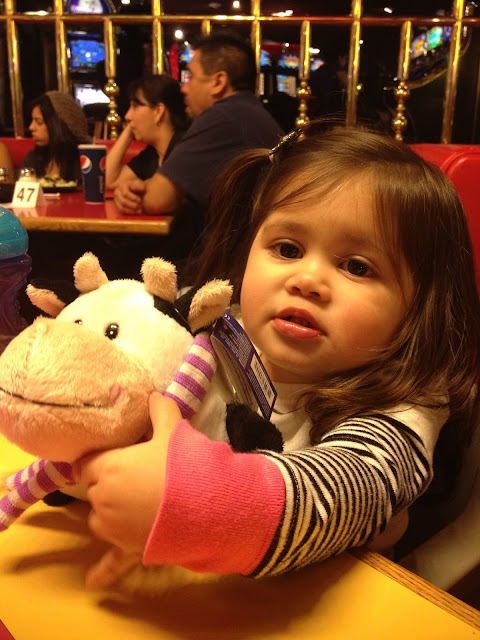 After some surprisingly good pizza, we headed out to catch the fountain show at the Bellagio.

We headed back to the room and I sent Joey out on a hunt for margaritas while I got the girls ready for bed. He came back with margaritas with test tube shots of tequila. He wanted to mix them in the drinks. That's no fun so I made him shoot it. Yup that's right. I was the fun one! 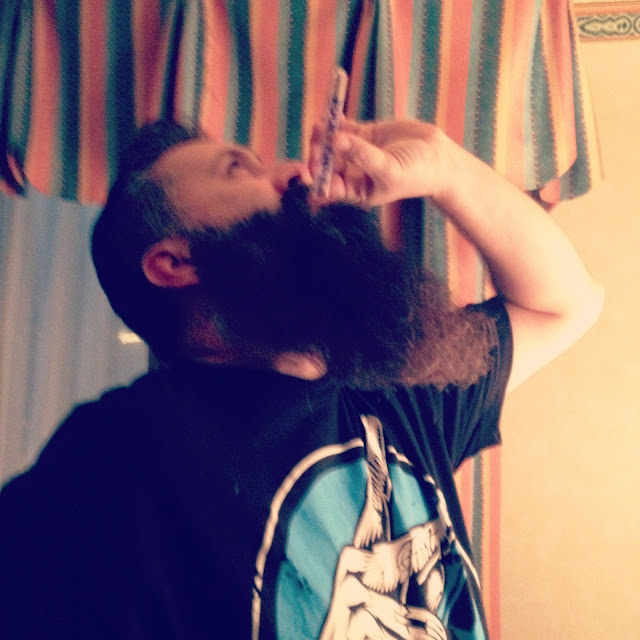 The next day we packed up and headed to the Adventuredome so The Phi could ride a few rides. 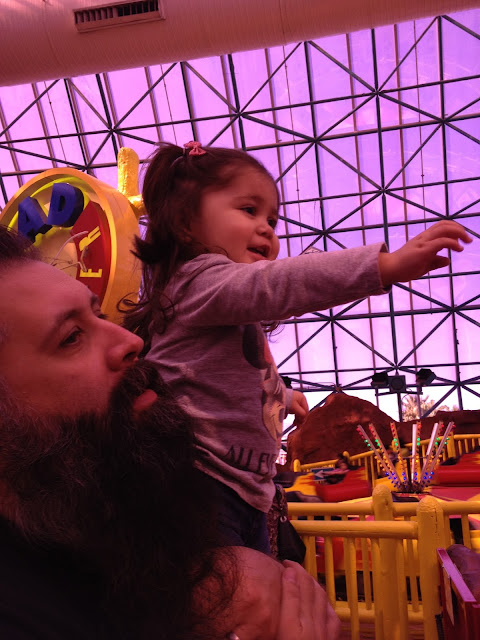 Then we stopped at the worlds biggest souvenir shop and the next thing we knew we were leaving Las Vegas. 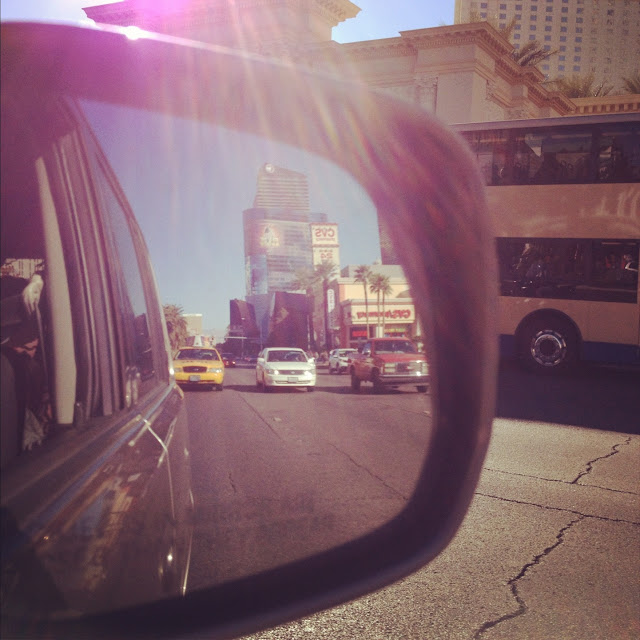 We drove from Vegas to Santa Barbara and man is that a long ass drive.

This trip has been 8 years in the making and well worth the wait. We all had a great time. On the drive back I told Joey "Do you realize that Louella did not cry once this entire trip?" Well she is making up for it now with her 2 hour screaming fits at bedtime. Luckily we have the Vegas memories to keep us happy.

Of course The Phi filmed an episode of her show and YOU HAVE TO go and see it....
CLICK HERE FOR THE VEGAS EPISODE OF THE SOPHIA & FAMILY ADVENTURE SHOW!
at March 01, 2012