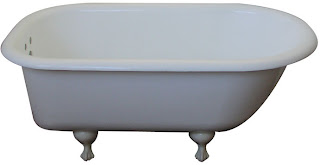 There are moment when raising these 2 little punks where I think, "Are they going to be scarred for life because of this?"

The other night while the girls were TAKING a bath Lou did something she has only done once before. Something that my good girl, The Phi never did. She pooped in the tub. The last time was not too bad, she was still in the bath seat so it was.....contained.

The other night I hear The Phi singing. Then the music suddenly stops and I head Phi say "Lou?.....Lou?....MOM!!!!" When I turned around The Phi was jumping out of the tub, Lulu was sitting there was a confused look on her face, and there was shit in the tub.

We panicked, we cleaned and then we laughed. Later I worried that this incident would scar The Phi for life. And then life went on and I forgot about it. Fast forward to yesterday to at The Phi's dermatology appointment with the handsome Dr. Love. He asked The Phi how she was doing and in her conversation she mentioned the poop in the tub incident. Dr. Love got a weird far away look in his eyes. If we lived in a sitcom we would have heard harps. Then he went on to tell us about how when he was little his younger brother did the same thing to him. He told the story so vividly and which so much disgust. He then admitted that it was an incident that scarred him for life.

So I guess it is safe to assume that when The Phi is an adult she will have some strange fear of bath tubs.
at January 17, 2012