We love Dia De Los Muertos! This year we went to a couple of events. For the first one The Phi and I went all out with the face paint. This was the first time I had to do the makeup and it was a learning experience.

First off The Phi wanted a full face paint. She also wanted to look like the character from her book Rosita and Conchita. So here is how we did it. The day after Halloween we stopped at a Halloween shop and took advantage of their half off sale and bought make-up. So first I circled her eyes with a black make-up crayon. 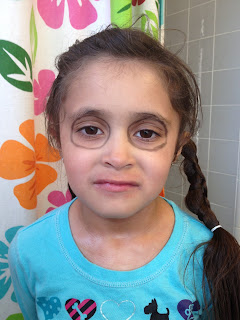 Then I used a sponge and covered the rest of her race with white grease make-up. I started to fill in the black around her eyes with the make-up crayon. It was not as dark as I wanted so I busted out my caboodle and used a black eyeshadow to fill it in. You can see the difference. 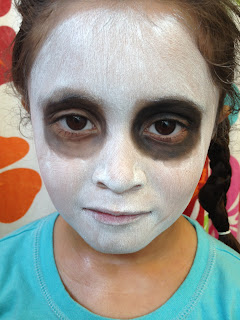 Then I realized that my liquid eyeliner pen was the best way to "draw" on her. I added the cross, outlined the heart, outlines her eyes, colored in her nose and drew on her mouth. 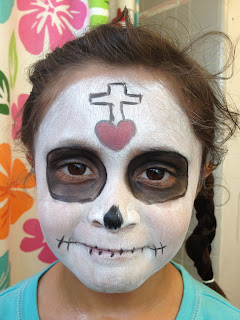 Almost done. I filled in the heart with a red make-up crayon and some lipstick. Next I outlined the "petals" around her eyes. I used a tube of pink Halloween make-up and my lipstick brush to fill them in.  And The Phi was done.

Not as good as Dad could have done. But The Phi was happy. 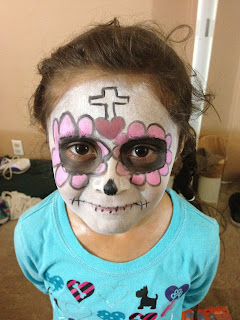 I went for the half face. 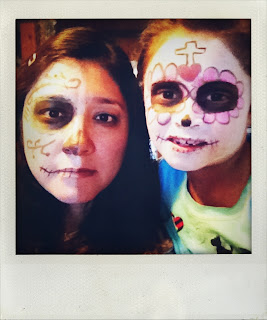 We were ready for Dia De Los Muertos!It's been a learning process and found that my make-up worked a lot better than the stuff bought at the Halloween store. Anyone have any tips for us?? What kind of make-up do you use?
at November 10, 2011