In our bedroom and in our living room wall the most current portrait we had up was of The Phi when she was about 3 years old. Obviously we needed an updated portrait. The Phi has grown so much and of course there was the whole we have a whole other kid now. So we have always had great luck at The Picture People. So I downloaded a coupon, made an appointment and took out the matching dresses my sister Elaine had bought the girls months ago.

I was a bit stressed about how the session would go. Lou will not sit still for me these days. So I was assuming the photographer would have a hard time getting Lou to pose. Once we got the girls dressed and hair combed it was showtime. And Lou, well, she was fantastic! 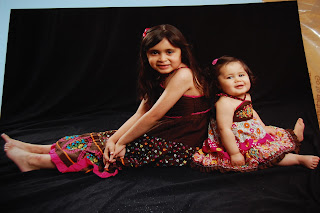 This is the photo we chose for the coupon package. And I intended to only buy the $18 package, but some of the other photos were impossible to pass up. So $80 later we came home with these..... 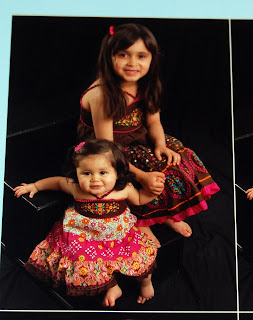 Holding hands and how perfectly gorgeous does my Phi look? How could I leave this photo behind? 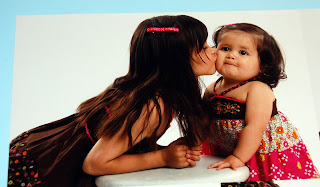 Sickening adorable right? I mean one day they are going to be fighting like cats and dogs and I can show them this photo as proof at how much they love each other.
The photographer asked if we had a costume change. I had not planned on one but I realized that the clothes I had brought for the girls to change into were kinda cool and could make some good pictures. So we changed their outfits and grabbed some props and this happened...... 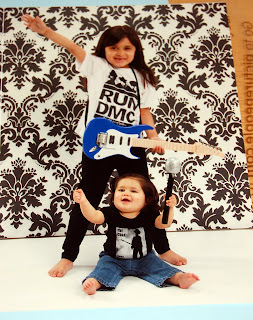 Now obviously this picture is amazing. My children are super radical rock stars.
And the background and colors will look fantastic in a black frame in my office.
And now the....... 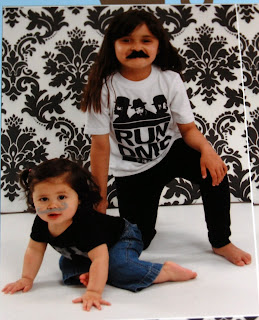 Yes those are fake mustaches on my beautiful babies! The other night at dinner we ran into a quarter machine with fake stick on mustaches. We love those things so we got 2 and I threw them in my purse. During the photo shoot I came across them and asked the photographer if we could do a picture with the 'staches. He loved the idea.

Now just guess which one is now proudly hanging in our living room???

That's right the mustache one.

Next up getting a new family portrait to replace the one we have hanging from November 2005.
at April 07, 2011