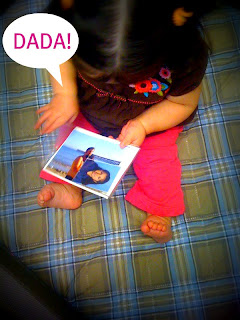 Lou is at the stage where she is starting to "talk" a lot. So of course her first words are just around the corner. I have been coaching her on "MAMA" for a long long time now. See The Phi really did me wrong when it came to her first words. Of course her first word was "DADA". The Phi was obsessed with her Daddy. Still is really. So I wasn't upset DADA was her first word. It's the easier of the 2 to say and is most babies first word. What did upset me was that after awhile The Phi began to build her vocabulary and was speaking in full sentences by the time she was 2. All that time she never said "Mama". She never called me anything. Well except that one time she literally called me "Hey you". It wasn't until after she was 2 years old that The Phi finally started calling me "Mom".

So with Lou I started the coaching early. Even Joey has been in on it because he feels bad for me. Every chance I get I am saying to her "MAAA-MAAA" and pointing at myself on having her hand on my face. So of course the other day as she is babbling away I hear "DADA" clear as day. I shrugged it off has just babbling UNTIL the other day at work. I put her in her play pen and handed her a framed picture. In the frame their were 2 pictures of Joey and The Phi and 1 of Chone. She sat really quiet for a long time and then said "DADA". That one was harder to shrug off. Then later that day we were sitting at the table eating dinner when Joey came home from work. He sat down with us, Lou gave a giant grin and said "DADA". So it is pretty official she says "DADA" now.

Now I just have to wait and see if Lou calls me "Mama" or goes the same route as The Phi and just calls me "Hey You". I am really hoping for the former.
at February 12, 2011