The Phi and I made it a long weekend and headed out of this hell-hole and left for SB on Thursday. We had a big weekend a head of us and we had a ton-o-fun. We started the weekend off on Friday because YEA Joey had the day off! We headed out to the formally lovingly little road in Carpenteria, Santa Claus Lane. Now I say formally because they have now removed the giant Santa Claus and Snowman and it is just a toy store and very few little shops. When I was little Santa Claus Lane was a big deal. They had a train and a candy shop and a place with tanks full of lobsters. Now it just looks old and abondoned. Sad really. But they do have the Padaro Grill and it was a nice place to kill some time before we headed into downtown Carp. 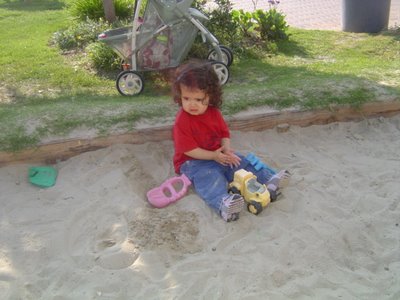 The Padaro Grill is right next to the water. They have a beautiful outdoor area with benches. We sat while Phi napped and read the Independent. (Man I miss living in SB!) and Joey mentioned how it reminded him of Hawaii. SB County really is paradise. The picture up there is of The Phi "playing" in the sand. They even had a big sand pit for the kiddies! She wasnt to into it. She is strange in that she does not like sand in her hands so that makes sand boxes not so fun for her. 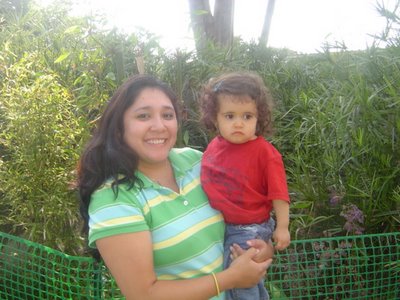 The Phi and I posing in front of the lush green plants. Seriously I have no idea why my kid is so emo! 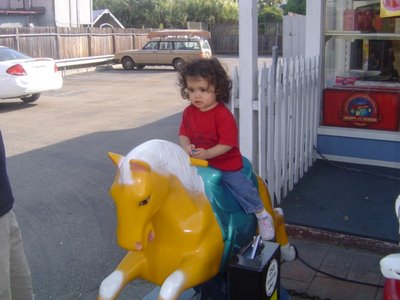 I can't believe Joey let her get on this ride. It had no seat belts. But you can see him standing near by ready to catch his precious baby. Safety first people! 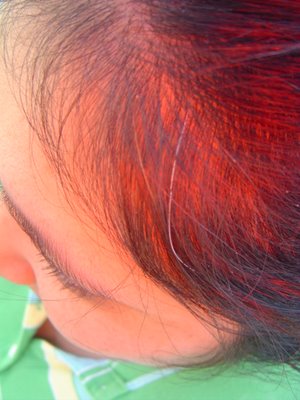 Yes that is a grey hair. As we were enjoying the time in the sand box Joey had to go a ruin it by telling me that he spotted a grey hair. This is my second one. He had to take a picture to prove it to me. This is what parenthood does to you. You better believe that I plucked that mo-fo. But I may need to color just in case he has some sneaky friends.