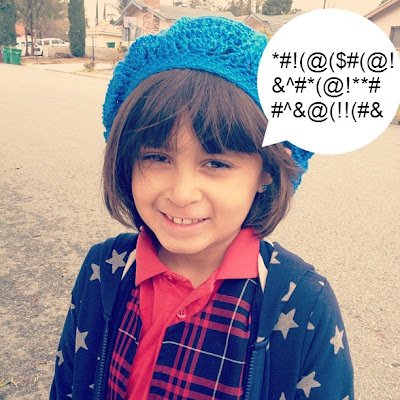 "Mom I want to hear what the F word sounds like so bad!"

That is what almost 8 year old Phi told me this morning. The night before the subject of "bad words" came up. She told me that a girl in her class has informed her that the "S" word was not a bad word. I has Phi explain what she meant by "S" word and she said "stupid". I explained to Phi that in some people's house it was okay to say that but in our house we didn't. It was a word that was not nice and could hurt peoples feelings. We don't like to use the term "shut up" either. Bad words came up again when it as 'Dance Party' time. I set up the strobe light and put the music on. Last nights the kids (and me!) wanted the ever popular "Thirft Shop" by Macklemore and Ryan Lewis. Great song and with curse words.  Phi was intrigued and asked what bad words it had. I told her that both the real "s" and "f" word make an appearance. I told Phi that I would put the song on but I didn't want to hear her repeat any of the bad words in it. We played the song and I tried to clap really loud or let out a "whoop" when the curse words came on.

Now she is obsessed with what the "F" word it. I told her that she has heard it in songs before but she still has no clue what it is. She asked me to tell it to her. She promised to never say it if I told her. I told her that she had her whole life to hear and most likely say bad words. I told her that before she knows it she will know all the ugly words in the world and I wanted to save the room in her head for beautiful and kind words.
at April 19, 2013