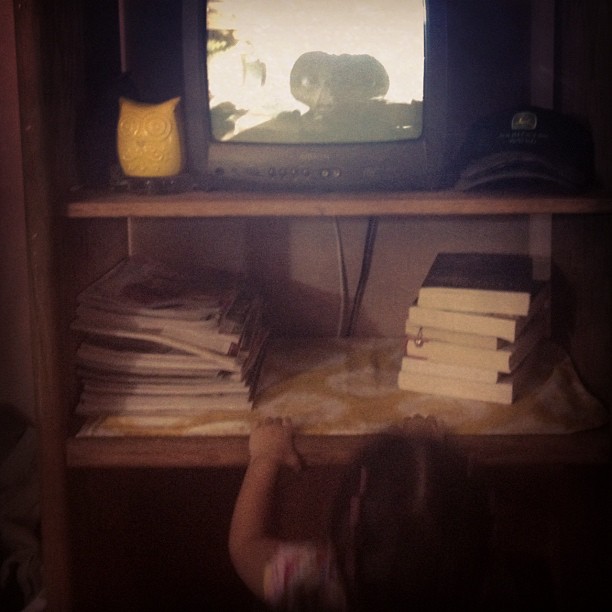 I was 4 and a half when the movie E.T. was released. Now I have memories of going to the theater to see it. From what I remember my Mom took me and my cousin. I also remember the ending, and sobbing so uncontrollably that I had to be carried out of the theater. It was something like THIS. It was so awful to me that I never saw the whole movie again.

Well of course over the holiday weekend it was on and as I was getting the kids ready for bed, Lou turned on the TV and was hooked. In follows The Phi and the next thing I know the 3 of us are laying in my bed watching E.T. Joey walked in and was like "WHA? You're watching this?". He knows all about how this moved scarred me for life. I told the girls we would only watch 20 minutes. And we did.

We watched the part right after Elliot finds E.T. and brings him home. You know the closet stuffed animal scene, when E.T. gets drunk, when Gerdie dresses him up and when he shows then where his "home" is. Lou was really into the flick. She kept looking at me and saying "phone Mom". The Phi was skeptical because she has heard my E.T. horror story.

Those 20 minutes of the movie reminded me why I was so devastated in the first place. I fell in love with E.T. He was an amazingly awesome alien and even though he really wanted to go home. I didn't want him to leave Elliot. In those 115 minutes E.T. became my best friend and at the end when he went home, and I lost my shit. I was so so profoundly sad.

Watching for 20 minutes reminded me why this movie effected me so much and I still don't think I could watch the whole thing.