How her mind works. 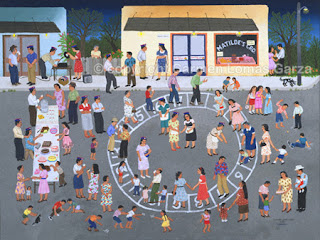 It is always so interesting to Joey and I how The Phi's mind works. Some of the craziest things come out of that kid's mouth.

While in Santa Barbara recently my parents and I were talking about the artist Carmen Lomas Garza. I brought up a few of her art pieces to show The Phi. I showed her this one here called "Cake Walk" She looked it over and after awhile she asks me.."Mom are those people like us?" I was taken aback and I asked her "what do you mean like us?" And she said "you know Mom like me and you." So I said "Do you mean Mexican?" and she said "yes!". My mind thought, she recognized skin color and part of me was a bit sad about that. So I asked her how she knew that the people in the picture were Mexican. She matter-of-factly stated "Because of the shape of the  houses and the pretty dresses." 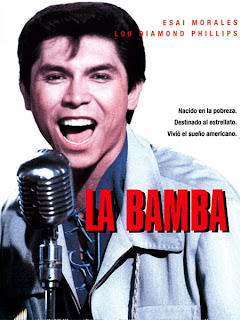 I recently had my Pops burn me a copy of a Los Lobos cd. They have always been one of my favorite bands and we have been listening to it in the car. Talking about Los Lobos lead to talking about La Bamba which lead to talking about Ritchie Valens. I gave The Phi a quick run down of Richie Valens and she became obsessed. She would ask me everyday. "Mom can you tell me about Ricky again?" I told her the story about 4 times when I told her, "You know they made a movie about him."  So it was set, the following weekend we had a movie night and one of the flicks was La Bamba. We watched it, we danced, we sang, we both yelled "RITCHIE" like Easi Morales does. After the movie was over I asked The Phi what she thought. She said she really liked it, she loved the music but she was disappointed that they didn't show the plane crash. I thought watching the movie would satisfy her obsession with Ritchie Valens, but as I put her to bed that night she said "Mom will you tell me the story about Ritchie Valens tomorrow?" 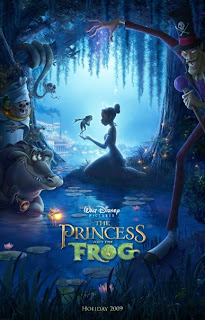 We have a Netflix membership, and it is set up that we get one cd and The Phi gets one cd. She usually watches the dvd in the car on long trips. For the last few weeks she has been watching The Princess and the Frog. She had probably seen it about 5 times when she said "Mom there is something I don't understand about this movie." I asked her what was confusing. She then began to tell me that at the beginning Tiana is a little girl and she goes to bed. Then when the sun comes up she is all "growned-up". The Phi couldn't understand how it happened. Joey and I then tried to explain time-lapse to a 5 year old. We tried several different approaches and at the end I am still not sure if she understood.

Watching The Phi grow up and learn is such an amazing thing. And to have Lou in the house at only 7 months old and not being able feed herself or even speak, it is a reminder of just how far The Phi has come in just 5 years. I love standing back and watching her figure out the world around her.
at January 17, 2011