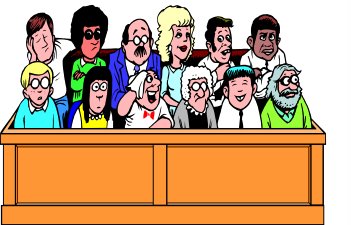 I guess he would have to be the guy in the back row with the green shirt, glasses and fro. Yup Joey has jury duty today. He had to leave way early this morning to be in Corona( yea they sent him all the way to Corona) for jury duty. He has called a few times today and he seems like he pretty interested in the whole process, but he can't believe that he is still on the panel. He thought for sure they would have sent him packing when they saw the faux-hawk. They have eliminated some people already for economic hardship, but lucky Joey works for a company that believes in civic duty and pays their employees while serving jury duty. I think he is secretly hoping to be picked for the final jury. I have never (knock on wood) ever been called for jury duty. I have a car and I am registered to vote, and in the last 10 years of eligability I have never been called. I once got a letter from a friend (infact I got it the night Sophia was born) who was just catching up on correspondences during all the waiting at jury duty. Anybody have a good jury duty story??